A customer of Linamar Corporation’s (TSX-LNR) Skyjack Division has recently completed a contract to supply 22 SJIII 4632s to aid in the building of Azerbaijan’s Olympic Stadium, situated in the country’s capital of Baku.

In June, 6,000 European athletes will gather at the new arena to compete in the inaugural edition of the European Games — known as Baku 2015. Representatives from 50 different National Olympic Committees of Europe will take part in the international, multi-sport event.

Since 2013, the 22 Skyjack DC electric scissor lifts have been working at the Olympic site in Baku, where they fitted the needs of the stadium-building contractors perfectly, said Ruslan Semikhov, department director at Skyjack customer and rental company Universal AZ.

“The machines were ideal for the job — we recommended them to the contractor based on their simple design, reliable reputation and low maintenance,” said Semikhov. “And once they got to the jobsite, the SJIII 4632s didn’t disappoint. During aerial work, where the machines had to fit piping, electricals, water lines and cables, the units’ drivability at full height really came into play.”

At its working height, Skyjack’s SJIII 4632 reaches 11.75 m, with a raised platform height of 9.75 m.  In addition, an overall capacity of 317 kg ensures personnel productivity is maximised.

Upon delivery at the jobsite, these world-leading, top-selling electric scissor lifts were used every day for 12 hours at a time, with running times ramping up to 24-hours a day as the completion deadline for the stadium drew closer. Semikhov said a resilient, hard-working machine was one of the contractor’s key requirements, and he’s confident the Skyjack’s delivered.

“Our customers needed machines that were durable due to the uneven ground, which was sometimes littered with metal and other debris,” he said. “Moreover, the SJIII 4632s had to work long hours across multiple zones on the vast jobsite. Our 22 Skyjack electric scissor lifts dealt with these challenges easily.”

“As a rental company, it’s important that the machines we buy to rent are easy to repair and require minimal maintenance — the last thing we want is a complicated machine that costs a lot to keep,” said Semikhov. “Skyjack’s common parts approach reduces maintenance time — off-the-shelf parts mean that, when we do need to replace or repair something, maintenance is simple and cost-effective, and machine downtime is minimal.”

Semikhov also noted how Skyjack’s simplistic design meant he only sent one person to manage onsite machine maintenance during the one and a half year project. “The person I sent had never worked with a Skyjack machine before, but they managed it with ease,” he said. “Skyjack’s proven colour-coded and numbered wiring system, SKYCODED™, made troubleshooting and maintenance extremely easy.”

The stadium was completed on time, ready for the opening ceremony of the European Games at the Olympic Stadium in June. And, although work is now finished, the machines will remain onsite during and after Baku 2015 to assist with other aerial work projects. 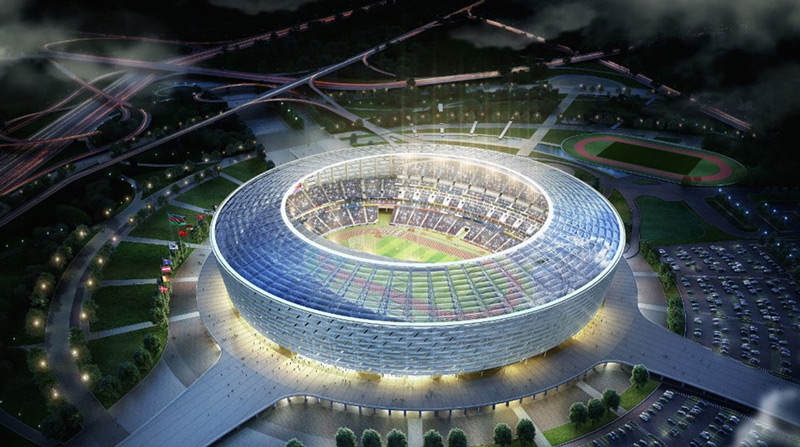