Linamar Corporation’s (TSX:LNR) Skyjack division is bringing the industry to the small screens as they introduce their aerial access and telehandler emoji pack. With so many different ways to communicate in the digital age, Skyjack is ensuring the aerial industry doesn’t get left behind.

“These icons are revolutionizing the way we communicate with each other and expanding how we convey our emotions – so we’re saying it with access equipment and telehandlers,” says Chantal Theoret, global marketing communications manager at Skyjack.
“We’re thrilled with the way our emoji pack turned out. The branding is perfect, the design is edgy and it appropriately conveys some of the top emotions being shared online through the use of classic emojis.”

The first ever emojis were introduced in 1999 and consisted of a library of 176 icons, but they weren’t commonly adopted until nearly a decade later. As of June 2018 there were over 2,800 official emojis in circulation consisting of diverse skin tones, gender selection, and professions. While many new emojis have made their way onto our devices, and many more being requested, there was still one industry missing: aerial access and material handling equipment.

“Anyone who has worked with Skyjack knows that we not only pride ourselves on being easy to do business with, but also one that likes to have a bit of fun,” says Malcolm Early, vice president of marketing at Skyjack. “The emojis are designed to be classic takes on what we’re all already using in our texts and social posts, which help keep our industry top of mind.”

Skyjack’s emoji pack includes a variety of scissor lift, boom, and telehandler spins on popular emojis like smiling face with sunglasses, thumbs up, and of course – face with tears of joy. These custom emojis don Skyjack’s orangered hue but are left unbranded so they can be unbiasedly shared amongst the masses. The emoji pack can be downloaded for iOS and Android devices and are available today. 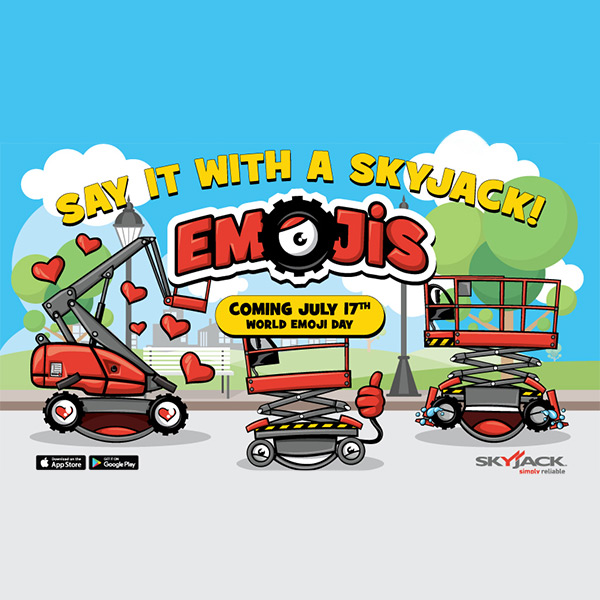