“Several Skyjack employees have been impacted by breast cancer and have fundraised money for several years, now we’d like to help them raise even more for a great cause,” said Brad Boehler, president of Skyjack. “From now through Oct. 31, Skyjack will be aiming to raise $10,000 to benefit the Canadian Breast Cancer Foundation.”

Apart from donating a portion of proceeds from all boom sales in October, the company will also be decorating its booms with a special pink ribbon when delivering the booms. Skyjack produces three articulating boom models, the SJ46 AJ, SJ51 AJ (Europe only) and SJ63 AJ, and four telescopic boom models, the SJ40 T (North America only), the SJ45 T and SJ61 T (North America only), and the SJ66 T.

Limited-edition “We Love Booms” t-shirts were also available. All proceeds will benefit CBCF for research and to help strengthen the lives of those impacted by breast cancer, the second leading cause of death from cancer in Canadian women.

The company kicked off its month-long campaign on Oct. 1 by welcoming visitors with an arch made up of two pink SJ63 AJ articulating booms at the company’s headquarters in Guelph, Ontario.

“We were surprised to see the pink arch when we drove toward Skyjack’s headquarters,” said Tim Whiteman, IPAF CEO, who was leading a group of visitors as part of the IPAF North American Conference. “Breast cancer touches many peoples’ lives and it’s wonderful to see a company such as Skyjack giving back to the community and supporting its employees.”

This is not the first time Skyjack has supported CBCF. The company has loaned machines for CBCF’s Run for the Cure for many years. 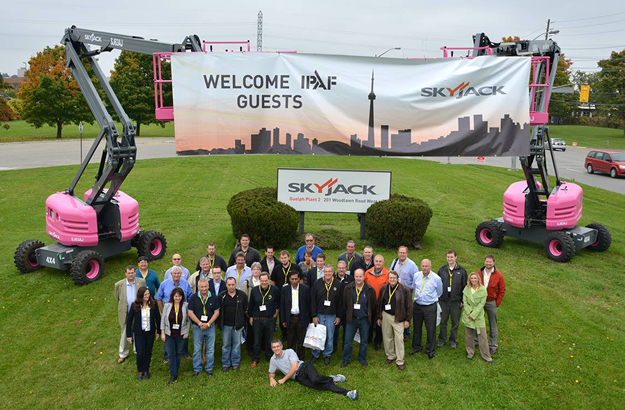