Linamar Corporation’s (TSX: LNR) Skyjack division is launching a new range of telehandlers. Designated the TH series, the four new telehandlers are engineered to extend the principal of simple reliability that has made Skyjack a world leader in aerial work platforms (AWPs). The TH series will replace the existing VR telehandler series.

“We are excited to offer Tier IV Final telehanders without the cost and complexity increase that normally accompanies a tier engine change,” said Brad Boehler, president of Skyjack. “In fact, new pricing and our ROI focused clean sheet design makes the range truly competitive and attractive to the rental industry.”

The four models in the new TH series includes:

Like other Skyjack telehandlers, the last two digits represent the maximum lift height in feet, while the number in front indicates maximum capacity in thousands of pounds.

“The new range can be seen as a true Skyjack product that offers simple reliability, while providing a leading return on investment without compromising serviceability or ease of maintenance,” Boehler said.

“To reflect these significant advances on this clean sheet design, we have changed the series name from VR to TH.”

Apart from the name change, the new telehandlers are also equipped with Skyjack’s simply reliable guarantee.

“We have offered an industry leading two-year warranty on our AWPs for many years and now we are making the telehandler a true Skyjack product by also offering our Gold Leaf Warranty as standard, which applies for 24 months or 3,000 hours, which over occurs first.”

Tier IV Final – Why costs do not have to rise

“When it comes to Tier IV Final regulations, we know rental rates don’t just go up to meet the increased costs of emissions compliance,” Barry Greenaway, Skyjack’s product manager said. “The TH range is engineered to require no diesel particulate filter (DPF), no diesel exhaust fluid (DEF) and no other active exhaust after treatment on standard engines for Tier IV Final.”

“For example fully loaded potential grade-abilities on the SJ1056 TH is 50%, while on the SJ843 TH it’s 63%, all with 74hp” Greenaway said. “This, and no increase in hydraulic function times, means that the SJ TH range delivers all the job site functionality expected of a rough terrain telehandler with a minimal tradeoff in third gear travel performance on 10,000 lb models. Those with a need for speed can select the optional 107hp power plant for the SJ1044 TH and SJ1056 TH which uses only a DEF after treatment system with no DPF requirement.”

With the SJ1056 TH, Skyjack has redefined what a 10,000 lb class machine is capable of by leveraging the strength and simplicity of the new TH series design. Current telehandlers in the 10,000 lb to 12,000 lb range typically lift their 10,000 lb load to a maximum height of about 33 ft with outriggers deployed.

“With Skyjack’s SJ1056 TH, the telehandler has the ability to take the same 10,000 lb load to 44 ft – providing increased productivity and versatility over even most 12,000 lb units,” Greenaway said.

Skyjack believes in simplifying products so that they are easier to operate and maintain from the inside out. The 74hp engine does not require the same complicated engine programming or computer logic of DEF equipped units. It also allows enhanced access for service and maintenance and the low profile engine cowling offers operators better visibility.

Other features standard on the TH series include:

The TH series is expected to make its first public appearances at the World of Concrete in Las Vegas, Nevada, and at The Rental Show 2016 in Atlanta, Georgia. All models will be in production by the end of 2015. 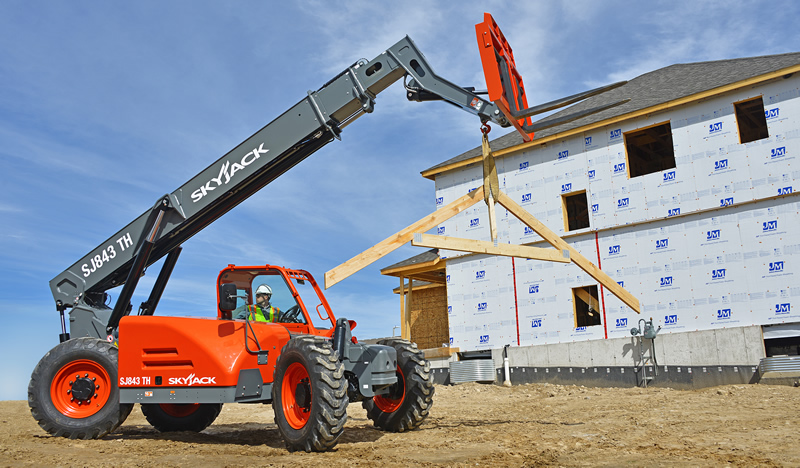